I’ve made it through three weeks of cooking (for the first time in my life), and there’s no sign of ADD-driven fatigue. I’m still looking forward to delivery day on Wednesday. Lots of ingredients in this box – spilled onto a separate section of the counter from previous boxes. Here’s what came this week: 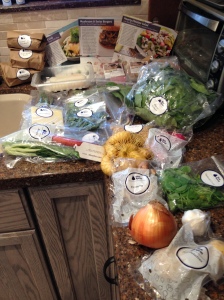 Until this point, I had posted every meal on Facebook because each was such a triumph, and some were punctuated with bloody injuries as I stumbled to get familiar with sharp implements. But I’m fairly certain my friends have started to get bored so I’m moving on to blogging, unless something spectacular happens.

Sad timing, because tonight’s dinner was a knock-out – 4.95 on the Rich-o-Meter, no injuries, and I’d definitely try it again on my own. The chicken salad was special because the chicken was pulled instead of diced, which allowed the flavors of the pickled rhubarb dressing to inundate the shreds. Wait, did those words just come out of my mouth? Until this week, rhubarb was something found only in a pie that Rich loves and I haven’t even had the guts to taste.

What is a Ramp? As with the Celeriac, I admit that I had to look this up before I approached it. Thanks to Wikipedia, I now know that it’s a “North American species of wild onion widespread across eastern Canada and the eastern United States.” I love onions, good enough! I was also concerned about the steaming (evoking images of double-boilers or steamer baskets), until I followed the instructions and discovered that the steaming actually happens in the same pan with the vegetables and a simple aluminum foil cover. 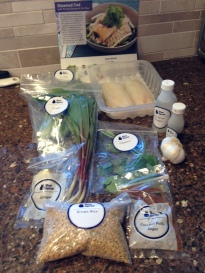 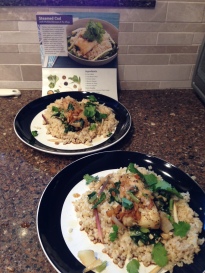 We lost a little momentum on this one. Rich charitably gave it a 4.5, but I couldn’t muster more than a 3. I’m not a huge burger fan, and making it with fancy ingredients, like Cremini Mushrooms and Beef Demi-Glace, doesn’t help. I won’t be repeating this one because I’d rather have a Crush burger from Mike’s at the Crossroads. I’m glad this didn’t happen in Week 1 because I might not have carried the same degree of enthusiasm into subsequent weeks. But with 11 successes under my belt, I was undaunted and looking forward to Week 5.

On the up side, we liked the lightly-dressed Upland Cress salad. And Rich pointed out that the “green stuff” on the potatoes really brought them to life. That was Rosemary, and I got a little pang when I remembered how unceremoniously we pulled the rosemary bushes out of our yard to make room for a storage locker.

This entry was posted on Monday, May 18th, 2015 at 6:57 pm and is filed under Blue Apron - Learning to Cook. You can follow any responses to this entry through the RSS 2.0 feed. You can skip to the end and leave a response. Pinging is currently not allowed.