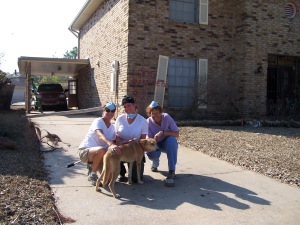 We’re gearing up for a shift change this weekend.  Sandy and Wendy are coming home on Friday, Jill is staying through the weekend, and Eric and Lorrayne are arriving Sunday. Here is an update on today’s activities from Wendy’s husband: “Wendy asked me to e-mail you about today’s adventure. They had a great day of rescues, Wendy and her partner broke into one house and found a Shepherd mix in a bathtub in very sad shape plus growling at them. So they called for back-up and once they got to dog out it turned out to be very loving and just happy to be with them. What a great story! She also  rescued a black lab that was belly up [editor’s note: in a good, submissive way] as soon as she got to him. Other than that just a dead alligator floating that was mistaken for a human being that’s a good thing. The other rescue crew found a couple of cats, so all in all a great day of saving 4-legged lives.”

More good news: after a conversation with Sarah following her return, Nancy Ross took the information and the plea back to work. As a result, one of her co-workers has volunteered to go, and her company has sponsored a fundraising effort to pay her(his?) expenses. That’s how it works folks – word of mouth and getting people involved.

The biggest challenge we’re facing at this point is making travel arrangements. Many of the flights into New Orleans are either sold out or cancelled. I don’t know if they are running limited service or what other factors are contributing, but I assume that evacuees are just trying to get home. Eric was packed, ready to go, and waiting for marching orders at the airport today, and we were unable to get him on a flight. We even had an itinerary that was affordable that we could have paid for, but it was unavailable because the final leg from Dallas to New Orleans had been cancelled.

By the way, when this is over, I will do my best to publicly acknowledge all of the people who have helped out. But right now, I need to thank Kathy Bennett (one of Sandy’s students, if I’m not mistaken) – not only did she donate enough miles to cover both Eric and Lorrayne’s flights, but she personally took on the responsibility for making all of their arrangements, fighting with the airline for seats, and paying the “short-notice” fee out of her own pocket. Again, that’s the kind of effort that is making this all work.

Financial update: We still need airline miles. I have a few more people who are ready to go on Oct 9th, and it would be great if we could help them out. American, Delta, Continental, and United (or other airlines that partner with them) are the most accessible. I’ve given up on the non-profit idea after being turned down by a couple of groups that I know pretty well. And I’ve concluded that those that are contributing don’t really care – they’re doing so from their hearts, not their tax returns. So if you’re still interested in contributing money, let me know – you can either send a check or use Paypal.

Well, today was a big day of success, changes and uncertainty.

The biggest news is that Sandy had two true saves today. There has been some confusion in the computer department and dispatch, so many of the houses on her list had already been checked. You can imagine how frustrating that was for her. But she and Jill took matters into their own hands and got creative. First, they started interpreting the codes that the National Guard had spray-painted on the houses during the human evacuations. It didn’t take long to figure out that “SPCA 1″ might mean 1 pet in the house. They broke into one house so marked, and sure enough, a live dog! The second one came when a worker (maybe a utility worker? don’t remember) reported having heard a dog in a house. Another break-in, and another save!  Wow! What an up note for the day.

From Wendy, I got the logistics update. There was some confusion with their return plans, so they’re actually coming home on Saturday. That’s a total of 12 days in the trenches for them. More importantly, she reported that Lamar-Dixon has announced that they will be moving all of their animals out and closing down the shelter at the Expo Center by Oct 15. Furthermore, they are suspending rescue missions and animal intake as of tomorrow, except for those in critical condition. But they will be continuing to distribute food and water to the neighborhood feeding stations for the animals that are still loose and surviving on the streets. And of course, the care of the animals on the site will continue until they have all been moved.

So Eric and Lorrayne are traveling into a very transitional environment on Sunday. It is very likely that they will be moving to a different shelter during their stay, perhaps Hattiesburg MS or Raceland LA. Or maybe somewhere else. I updated both of them with the new information to make sure it wasn’t getting too scary for them. Lorrayne’s response was great – “It’s just getting more interesting. I always wanted to see Louisiana, Mississippi, etc.”  Don’t worry, she’s not being flippant – she gave up her romanticized vision of the trip very early on and is going in with eyes wide open.

Volunteer update: Cara Calloway and 3 friends from SoCal are leaving on 10/9. Her friends have to return on 10/15, but she is planning to stay (somewhere) until 10/23. Bay Teamer Deborah Dulaney let me know that she negotiated some time off work and will be ready to leave on 10/16 for a week.

Financial update: We made HUGE progress on airline miles today – thanks to all of you who responded. We are now able to take care of transportation for all seven of the volunteers mentioned above, and even have some waiting in the wings in case other volunteers step up. Contributions are still rolling in as well to help with RV rental, car rental, camping fees, gas, etc. I can’t thank everyone enough, and as soon as we emerge from the other end of this thing, I’ll make a list.

This entry was posted on Thursday, September 29th, 2005 at 9:47 pm and is filed under Hurricane Katrina - Lamar-Dixon Chronicles. You can follow any responses to this entry through the RSS 2.0 feed. You can skip to the end and leave a response. Pinging is currently not allowed.